“Hadrian's Wall” was listed in Napier's index, as a 40 bar reel by Derek Haynes, with no other details. The following description is copied from private notes

Derek did not include this dance in any of the “Carnforth Collection" books. Maureen Haynes, Derek’s widow, wrote: "I have found the details of the dance Hadrian's Wall devised by Derek. It has almost been like looking for hidden treasure! It is a 40 bar Reel for 3 couples in a 3 couple set, devised when he was still a member of the Liverpool Branch with a tune written by K. Macaulay Jones, also of Liverpool Branch, who also wrote the tune for Neidpath Castle. It would appear that the dance was never actually published and in a list that Derek put together himself of all the dances that he had devised that one is not mentioned. And as he did not include it in his Carnforth Collections I can only presume that he did not think it worthy of publication. Perhaps he chose to forget it!"

As mentioned in Glendarroch SCD Sheet No.34 on http://www.dancearchives.co.uk/dances/glendarroch/spey.htm from 1969, the dance "Hadrian's Wall" was rearranged by Derek Haynes to produce "The Spey in Spate". Possibly, Derek preferred the new dance, and thus did not include "Hadrian's Wall" in the Carnforth Collection, published about 20 years later, while including "The Spey in Spate" in his Carnforth book 3. 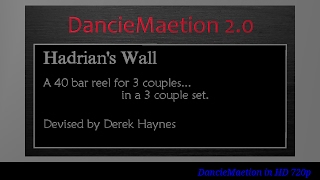