Newcastle 2012: The Making of a Display

The Newcastle SCD festival is one of the more important festivals around, which is probably partly due to the international audience it attracts: For several years the International Team has been making quite an impact, and dancers from Germany have also made an appearance in a »German Team« led by Ute Hoppmann-Lacour of Wuppertal.

As far as I'm concerned, the most interesting and challenging event in the festival is the »display«, where groups put on eight-minute choreographies of various dances which are graded not on perfection of technique but on entertainment value. With the Frankfurt club we have been dancing choreographies for a number of years (the most involved to date being the 15-minute display for the 2011 »Museumsuferfest«), and so taking charge of the German Team display for the 2012 Newcastle Festival was a very exciting project for me.

While our displays at the Museumsuferfest are geared towards the general public and mix country and highland dancing, it was clear from the start that the Newcastle Festival audience consists of people familiar with SCD, and that part of the challenge was to show something that not simply represented a (fairly arbitrary) selection of dances, but that would have some overarching »thread« or theme running throughout the display which people who were dancers themselves would appreciate. It turns out that the most recently published book of dances by the Society, Book 46, contains an unusually high proportion of good dances with considerable variety both in the music and the dances themselves, so why not present a number of dances from the new book? Since many of them are currently popular in classes and on the social circuit, spectators are likely to be able to relate to the dances and to enjoy them put together in a »display« context. (It turns out that the winning display at the Festival, that of the International Team, used a very similar idea, so at least we were on the right track.) 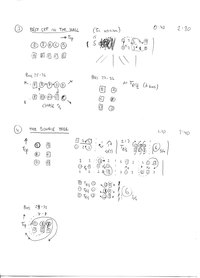 During the second half of August, 2011, I finished a first draft of the display choreography (look to the right for a preview), consisting (in sequence) of

The time limit of 8 minutes implied that not all dances from the book would actually fit, and the final selection was based not only on which dances would lead into which, but also on the tunes and their keys (as far as possible I wanted to avoid having sequences of tunes in the same key). The time limit also meant that each dance would only be danced once through, and the quicktime/strathspey/quicktime sequence was used for maximum variety.

It would have been nice to be able to use two four-couple sets in the choreography, but as it was doubtful that enough people (16 plus reserves) would turn up for the team I decided to write the display for 12 dancers (two three-couple sets, maximum). We did have up to 20 dancers for the rehearsals and so ended up adapting the choreography to swap some people out and in in the middle to give most of them a chance to take part, but in the end, owing to various people dropping out because of illness or injury, we danced the 12-people version with no changes at the Festival. The choreography changes set arrangement from dance to dance, and some of the dances had to be adapted to suit the small number of dances – this is most notable in Links with St Petersburg, which is originally a three-couple dance but had to be cut down to two couples per set to enable the triangular set arrangement (sorry Malcolm). 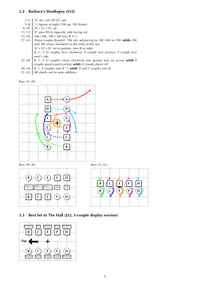 On 27 and 28 August 2011, the team met for its first rehearsal weekend in Leverkusen. Due to another commitment, I could only get there in the late afternoon of the 27th, and Ute kindly spent part of the Saturday walking the dancers through the »original« versions of the Book 46 dances in the display. We started work on the actual display choreography in the morning of the 28th, and by the end of the afternoon managed to dance through it in chunks of three dances at a time. But at least we knew that it would basically work! I spent the time between this rehearsal and the next finishing the detailed writeup (look to the right for a preview; note that this is not 100% equivalent to what we eventually danced).

The next rehearsal was on 12 and 13 November, and when we went home on the Sunday the choreography was mostly settled with a few rough edges. The only thing left undone at this point was the exit, which still had to be added to the music (an assembly of pieces from the Society's Book 46 CD played by Robert Whitehead and his band) – as a matter of fact, the last dance (The Zoologist) is a 40-bar dance but when I put together the music I inadvertently included 32 bars only! However this error was of course corrected for the final rehearsal.

Our final rehearsal took place on 28/29 January, 2012, and as one dancer was in hospital with an intestinal complaint and another had to drop out during the Saturday morning with an injury, we were almost back to the 12-dancer version from the start! We spent the weekend fine-tuning the covering and some of the transitions – in particular, we found that the one-and-a-half turns at the end of Scott Meikle made for a very difficult entry into Barbara's Strathspey, so we replaced them with »cross and set«. The Team did a tremendous amount of work and at the end of the Sunday afternoon we all felt we had done very well and were looking forward to the Festival.

Finally, the »big day« was 11 February, and we found that we were to be the second display on stage, after the »home team« of Newcastle RSCDS branch. Out of a field of nine entries, we thought that we did rather well, even compared to some of the other competitors who presumably practiced together every week. The Team definitely showed a standard of dancing that was on a par with (or better than) everything else in the competition, and the choreography was also commended by various people watching (if I say so myself). The two things we could do to improve our showing would be to attract more dancers (it is difficult to compete with the International Team's turnout of 24), and to work on more variety in the music (live music would be good, too), which due to its focus on the Book 46 CD was a little dull compared to that of some of the other teams. Food for thought!

Looking back, the project was a big challenge but it was also great to work with such an able and dedicated team. You rock! And we'll definitely be back in 2013.

You see things, and you say »Why?« But I dream things that never were, and say »Why not?«
– George Bernard Shaw