For Bruce Herbold on the occasion of his 50th birthday. A wonderful teacher, fellow dance devisor, and fish biologist, I had intended to surprise him with a dance on his 49th birthday but the muse was too elusive. This time she stayed just long enough. This dance pays homage to two of his fishy favorites: The Duran Ranger and The Salmonfield Poacher. “Easily Led” is a reference to one of his favorite teaching exercises which is to brief either the women or the men and have them lead their partners through a dance with non-verbal cues.

In the interesting discussion on the "Strathspey" list in november 2015, about bars 9-16

(which read 9-16: 1st couple dance down the middle for 4 bars with nearer hands joined, on bars 13-14 1st woman dances under their raised arms and in front of her partner (as he dances below her) to switch places and face up, on bars 15-16 they dance up to third place to face 3rd woman.)

"My short answer: the text of The Elusive Muse should stay as is. I believe the description of the turning movement is clear. (Please correct me if I am wrong.) It is what I intended when I wrote the dance.

My long answer for those who are interested. Yes, the dance is a nod to The Duran Ranger and to the way I learned that movement which was before the clarifications had been published or were (as) widely known. The description of The Elusive Muse uses nearer hands because 1st couple is on opposite sides to begin the turning movement...and because my own feeling about the movement (man dancing below his partner) is that it is more easily/gracefully accomplished when nearer hands are joined.

As Duncan has noted, the movement seems to have an equal chance of going the right way and the "other right" way. Since it is only danced by 1st couple in The Elusive Muse, the most important thing is that 1st couple switch sides to face up without injury (and ideally with grace). :-)" 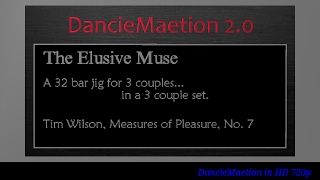